VooDoo has a bad connotation, culturally we think of VooDoo as something evil. Hollywood has sensationalized VooDoo giving it a bad name. 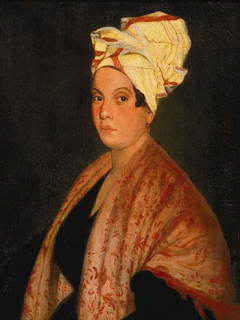 While I was in New Orleans we took a walking tour and learned about The Queen of VooDoo, Marie Laveau. She was a Louisiana Creole Practitioner of VooDoo.

Louisiana VooDoo also used the knowledge passed down from their African and Native American ancestors of herbs, poisons, and ritual creation of charms and amulets intended to protect oneself.

What I found interesting is how the VooDoo doll story came into effect. Marie Laveau was dedicated to her practice but she couldn't read or write. When she saw her "patient" she would make a doll of them. She would then stick a pin in the doll of where the injury or pain was. New Orleans residents would walk by her shop and see the dolls then see the patient walking down the street looking sickly.

The tour guide shared this is how the rumors started with VooDoo dolls. It was said she would stick the doll "in the knee" and the person would have knee pain. When it was just the opposite.

I find this story and the story of the Salem Witches very intriguing. These stories are lessons we need to learn from. Especially in this day and age of "Fake News". I wonder what history will tell us in two hundred years about our time.