Amazing is all I can say.  I had a super, terrific time at Summer Camp with my son and his Boy Scout Troop.  And to hear my teenage son say I can go camping with the Scouts anytime made it even more special. 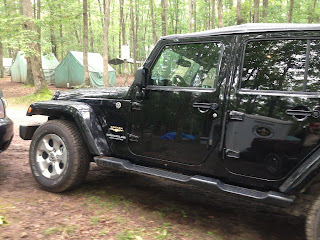 I asked him why  he said it was okay for me to camp with the scouts.  --One thing was I stayed out of his hair and I wasn't typical nag-mom.  Instead I was cool Jeep Mom! --The second thing was my Bear Scare.

I had the scouts -not all- believing the pineapple juice I spilled on the rock would not be able to be cleaned off.  I informed them that bears have a ten times stronger sense of smell then dogs and that pineapple juice was one of the most potent fruit smells out their.  They were very scared.  I didn't think they would fall for my story.  Most know how I like to exaggerate.  But I guess when the Scoutmaster came in to play along and my great acting -- we had those Scouts hook, line and sinker.

One Scout said "We are Scouts, we can figure this out."  Some were ready to kick me out of camp.  I really got a kick out of watching and listening to them. 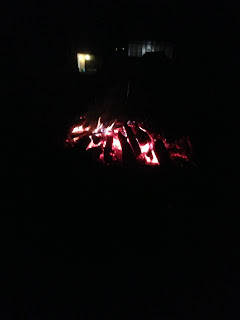 Then later that evening by the fire an older Scout had a speaker and hooked it up to a bear sound and played it.  Of course I went running and screaming.  Not too far behind me were lots of screaming and crying scouts.  I felt pretty bad that evening but the next morning they were all over it.  It was definitely a memory for all at the camp.  Remembering "scary campfire stories" is always fun.