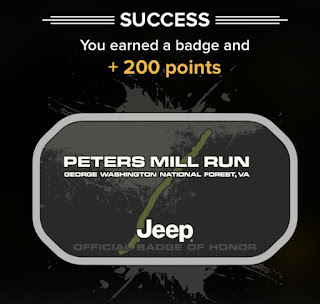 When I first heard Jeep added a new trail in Virginia to the Badge of Honor App Trail list, I began planning my first Jeep Momma Trail Ride.  Myself and some of my Jeep friends were ready to wheel the Peters Mill Trail just
outside Edinburg, Virgina. 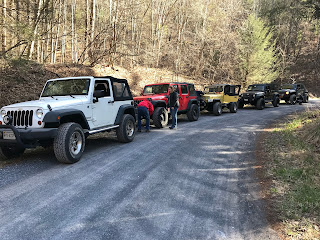 This trail typically takes about one to two hours. To get the most out of our day, we planned for the group to wheel another trail, as well, called Flagpole. Flagpole is about 40 minutes south of Peters Mill Run just outside of Harrisonburg. 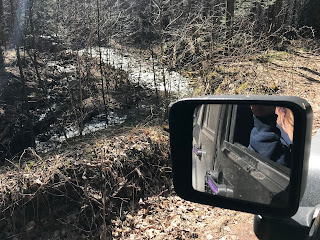 The trail is in the George Washington National Forest and I am told has a spectacular view of Virginia and West Virginia when you reach the top. 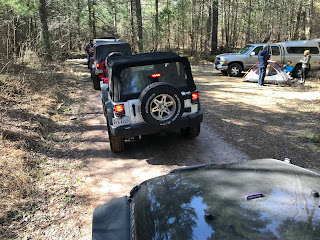 So we headed up the mountain. Along the way one of the Jeeps had mechanical issues. We tried our best to get him back up to speed, but no such luck. One of "rules" of off-roading is never wheel alone, so one of the Jeepers in our group escorted him back down the mountain. Then we headed back up to the top. 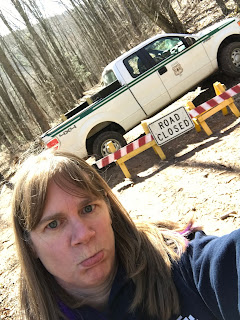 Unfortunately another wrench was thrown into our plans. There was a controlled burn going on by the forestry department right in the middle of the trail. We did not find this out until we reached the "road block" about 30 minutes into the trail.
While regrouping and coming up with a new plan, two other Jeepers came to the same road block. We invited them to join us as we headed to Peters Mill Run.

Peters Mill Run is part of a trail system that requires a permit. So we stopped at one of the local gas stations to pick up our permits, $5 per day. This was the perfect time for our lunch stop. Originally the plan was to eat at the top of the Flagpole trail and take in the spectacular view, but we adapted. Lunch was on me for this trail ride. I was testing out cooking in the engine. At the start of the trail we placed the sammie in between the
intake manifold & battery. 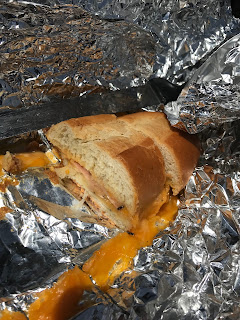 After cooking for a little over four hours we opened up the ham and cheese sammie. I was pleasantly surprised as it turned out very yummy. Check out my YouTube Channel on Sunday for a video on Trail Food. 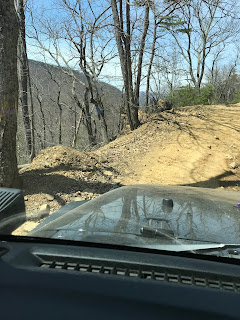 Now it was time to go earn our badge on Peters Mill Run, then off to Taskers Gap, another trail, to end day. Peters Mill Run is an old mining road on Powell Mountain. It's a very bumpy trail winding around the mountain. Once again our plans were thwarted. 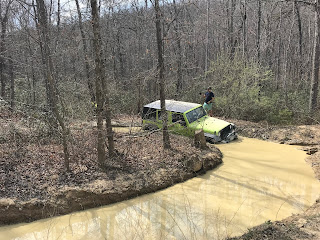 As we were nearing the end of Peters Mill Run we came across one lone Gecko stuck in the mud. A Gecko colored Jeep. Another off-road no-no, never wheel alone. 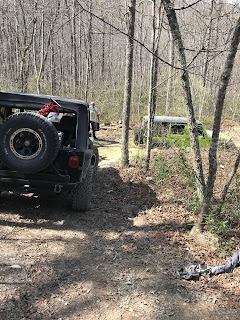 Of course as Jeepers we would never leave a man behind. So we broke out the recovery gear and winched out the Gecko. 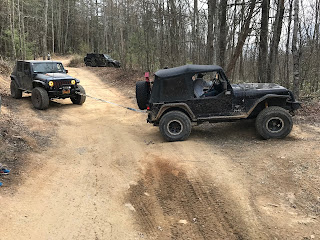 He was really bogged down in the mud so it took us quite awhile to pull him out. That meant it was too late to hit the last trail. 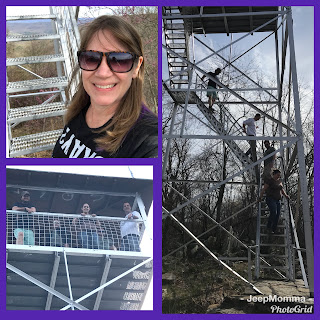 But we made the best of it and checked out the Woodstock fire tower. Of course I only made it up one flight of the stairs before I had to come down. 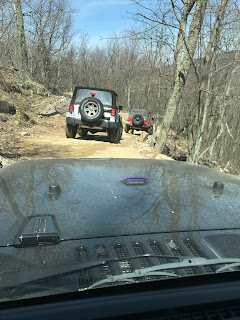 Over the past several years I have been working on my flexibility, my ability to go with the flow. This day needed quite a bit of flexibility. Being a Jeep owner who loves the adventure and off roading you learn quickly it's not always about the destination by the journey. 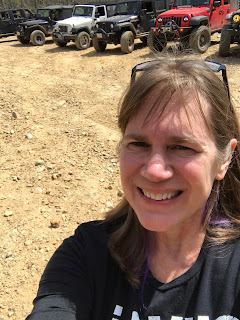 This journey was a great one as I meet two new Jeepers, learned a little more about recovery and had a great time out on the trails with some pretty amazing people.